Four kids, two foodie parents, all trying to get along.

If you’ve found this blog because you are trying to train your dog, don’t read further.  When I am able to get our 71lb, 9-month old Swissy to stop jumping on us, I’ll let you know. For the rest of … END_OF_DOCUMENT_TOKEN_TO_BE_REPLACED

Kid #4 now eats mushrooms.  Victory is mine. This is more than just a silly little fungal triumph; this is about getting a kid to trust, to tackle apprehension, and most impressively to admit she was wrong and adopt a … END_OF_DOCUMENT_TOKEN_TO_BE_REPLACED

Kid #1 has finally chosen a university to attend next year.  Let the heavens sing.  This event called for yet another celebration. Having three teenage boys among the four kids left in this house gives one perspective on so many … END_OF_DOCUMENT_TOKEN_TO_BE_REPLACED

Adapted from “Heart of the Artichoke and Other Kitchen Journeys” by David Tanis, via Chow.com… WARNING: This is not a come-home-at-7-have-food-on-the-table-at-7:30-meal…   INGREDIENTS 1t whole coriander seeds 1t whole cumin seeds 3oz dried CA or NM red chiles (original … END_OF_DOCUMENT_TOKEN_TO_BE_REPLACED

Sometimes society’s notion of “classic” food pairings leaves me completely confused and annoyed. Take the standard “peas and carrots” malarky that we’ve been led to believe, as evidenced by Forrest Gump himself, were made to go together.  Cooked peas and … END_OF_DOCUMENT_TOKEN_TO_BE_REPLACED

I recently had the opportunity to be a guest teacher for a few of the local high school’s culinary classes.  Their teacher left instructions for them to make plans for a Cooking Challenge that was to happen later in the … END_OF_DOCUMENT_TOKEN_TO_BE_REPLACED

I took a couple of my kids to the restaurant supply store downtown today; kid #2 has wanted to go since the first day I joyfully received word that I had been approved for membership to this private and oh-so-amazing … END_OF_DOCUMENT_TOKEN_TO_BE_REPLACED

Adapted from Grant Achatz’ version in Food & Wine. This is a great dish for kids, because it’s both simple and crazy at the very end…perfect.  Do it in order, so that the cauliflower, potatoes and kale finish right … END_OF_DOCUMENT_TOKEN_TO_BE_REPLACED

I don’t usually put desserts on The List, simply because I don’t frankly care if they all agree/disagree on whether or not to eat a particular sweet dish.  But recent events in the house prompted me to share this musing… … END_OF_DOCUMENT_TOKEN_TO_BE_REPLACED

I am notorious for letting my gas tank get as far below empty as possible.  I don’t know why, and it drives my husband crazy, but I do.  So this morning I was in a desperate state of affairs, knowing that unless I filled up immediately, I probably wouldn’t make it home.  Between two of my three school drop-offs I begrudgingly pulled into the gas station, and as I was unenthusiastically filling the tank, I realized how completely hideous I looked.

Many mornings I go to work, so I leave the house at least looking like a mentally stable grown-up.  However, on my now-rare days off, I try to squeeze in a few extra minutes of sleep between the puppy’s 5am trip outdoors and the Rousing of the Natives.  Fortunately, they can all fend for themselves now (except the puppy) and I don’t have to do things like remind them to brush their teeth or find two shoes that match, so I do have the luxury of going back to bed for a little while after they show signs of life.  Eventually I get up, make sandwiches for the lunches they’ve already assembled, and we’re off.

Of course, this leaves about 57 seconds to get dressed, and since I know I’m coming straight home, I don’t think much about it at all.  So as I stood there filling my gas tank, I realized I looked like an oreo cookie — class on both ends, with crap squeezed in the middle.  A UCLA alumni sweatshirt on top, a pair of nice patent flats on the bottom left in the car from work the day before (don’t even ask about my Shoes in the Car thing), but hideous microfleece sweatpants that I made specifically for snow camping, meaning no one was ever supposed to see their blue and yellow plaid-ness, ever, since we wear several layers when backpacking in snow and this particular layer was designed to be covered by at least one more at all times.  Yet here I was, thankfully without any high school kids left in the car to remind me how embarrassing I was to them, flaunting my complete trade-in of self-respect for comfort, for all the world to see.

I’m frankly too old to really care, but it did make me think about food, of course.  Sometimes three nice-on-their-own parts, with their own purposes, can be complete crap when combined.  The first example that comes to mind really should have its own post entirely, but I’ll preview it here.  Once my husband and I were treated to a very expensive dinner in a very trendy restaurant — but it was honestly the very worst dinner either of us had ever experienced.  The other nauseating details will have to wait, but if you take a nicely glazed fish, seared on a very hot griddle, and then without cleaning that griddle you brown homemade marshmallows upon it, you get barf-inducing Fishmallows.  This is what the restaurant (hopefully accidentally) served us that night.

In this same category of Foods Not To Be Mixed fit some of my teenage backpacking memories of being the last one out of the sleeping bag in the morning only to find all the flavored oatmeal gone.  An inventive leader, dead-set on making me, a verified plain oatmeal hater, eat something, made it his 11-day mission to come up with some concoction of oatmeal and backpacking leftovers that seemed palatable.  Why we didn’t just add hot chocolate or apple cider mix, I don’t know; but instead I tried oatmeal mixed with dehydrated red beans, bits of beef jerky, the dry sauce mix from some sort of backpacking lasagna nightmare, etc.  But I think the worst mixture was plain oatmeal, squeeze cheese (EZ Cheez, I think it was called, thus making it about as Un Cheese as tire rubber) and dry butterscotch pudding mix, three things acceptable on their own (though EZ Cheez is questionable as technically a food, but on the trail and in the right context I suppose it can qualify here, if nowhere else) but meant never to come in contact with one another, ever.  Despite this daily culinary adventure, the prospect of facing a new and always inventive precursory version of the Denny’s Skillet (so I’ve heard) wasn’t enough to rouse me out of my warm-ish bag in time for the coveted blueberry or maple brown sugar oatmeal, so I suppose it serves me right.

On the other hand, just the opposite can be true, too.  This obviously does not apply to my fashion statement sort of morning, but often rather mediocre beginnings can have a profound effect if combined properly.  Take gelatine, for example.  Cooks have a choice — one may either turn plain gelatine into, say, some sort of nasty blue jello mold seated atop wilted lettuce with sugared fruit suspended inside and pink-tinted Cool Whip on top (yes, I’ve seen this…people do make this stuff), or one may use it to make a beautiful buttermilk eggnog panna cotta with caramelized rum sauce (our dessert this weekend).  There are only three ingredients to my buttermilk eggnog panna cotta, and each taken alone is really nothing to shout about.  Yet combined they become a dessert with the silkiest, smoothest texture you’ve ever experienced, definitely greater than the sum of its parts.

I originally used a version of this buttermilk panna cotta for a large celebratory dinner for 100 that I recently catered.  That dessert included a luscious lemon curd and rosemary lavender shortbread, too.  However, panna cotta was designed as Italian comfort food, akin to Jell-O Instant Pudding these days here (ick, by the way).  The original version included the addition of sugar, vanilla and lemon zest; however, the eggnog already contains sugar and vanilla, so I omitted it here — thus the three ingredient dessert, perfect for everyday but easily spiced up for a very formal affair.  I like to add caramelized sugar ornaments or spun sugar tiaras (depending on the weather, as spun sugar doesn’t tend to work properly in high humidity), or preserves or curds or… Really, we’ve had this so many ways that I can’t even begin to list the variations.

Place 1/4c buttermilk and the gelatine in a small saucepan and stir over low heat to dissolve the gelatine slowly.  Remove from heat.

In another saucepan place remaining buttermilk and eggnog and bring to a boil, being careful not to let it boil over.  Reduce heat and simmer 5 minutes.  Remove from heat and whisk in gelatine mixture.  Strain into a glass measuring bowl with a pour spout (or something similar) and allow to cool a bit.  Pour into lightly greased (Pam works fine) ramekins and refrigerate until set, approximately 3 hours.

When ready to serve, run a knife around the edge and invert panna cotta into your hand and then onto a plate.  Serve alone or with caramelized sugar (see below), preserves, caramel sauce, rum sauce, caramel sauce with rum, preserves with rum, nutmeg, nutmeg with rum…you get the picture.

* Caramelized sugar: Heat 1 cup sugar with about 1/8 cup water, swirling the saucepan rather than stirring.  Use a pastry brush dipped in water to constantly wash down the sides to prevent crystallization.  Allow sugar to heat slowly, but watch it carefully — it’s a fine line between golden caramel and dark brown garbage (reminds me of a YouTube video I once saw where this girl pretending to be an expert was “teaching” how to make caramelized sugar decorations, but her caramel was the color of dark chocolate, totally burned; to people’s comments about her burned sugar she simply replied “it’s a dark, rich caramel” rather than admitting she blew it and was just too lazy to do it over.  Face it.  If you can’t easily see through your caramel to the bottom of your pot, you burned it.  It’s just a cup of sugar.  Do it over.)

Anyway, heat your caramel and then let it cool a bit.  Take a spoonful and drizzle a long line across either a piece of parchment paper or a silpat mat.  If it beads rather than creates a smooth, continuous stream, it’s too hot.  Wait until it works, and then do it again — you can always reheat the saucepan if it cools too much.  Make long lines in both directions, creating a crosshatch pattern…or make squiggles…whatever.  Avoid huge pools of caramel…long pieces taste the same and look way cooler.   Allow to cool, break into pieces, and garnish your panna cotta.  Do not try to make the caramel more than a few hours ahead of time, as it tends to soften and absorb the moisture in the air.

The newest member of our two parent-four kid-two cat-one lizard-one snake household is a Greater Swiss Mountain Dog puppy named Ella.  At nearly 50 lbs, this 5-month old is in the middle of her puppy training, though it’s really more … END_OF_DOCUMENT_TOKEN_TO_BE_REPLACED 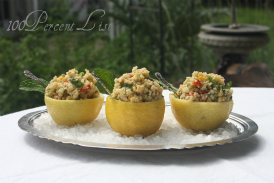 four kids, two foodie parents, all trying to get along. 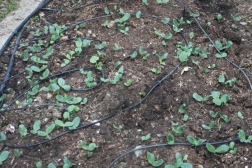